August 14, 2014
Well besides having a pretty crappy end to last week and a sleepless weekend, this week is looking very "up". I had a yo-yo temperature on Friday night and a pretty sore throat, which followed throughout the weekend, followed by bouts of meh and sleeping lots. Finally started feeling normal again Monday, but what a waste of a weekend a bug can be!

Anyway, I had a bit of a revelation yesterday when emailing my publisher. Somehow I had a word count stuck in my head from before I started properly down the publishing highway and it now seems I've been aiming a little high (certainly as an unknown author)!

I'd researched average word counts and for Sci-Fi (which is where I'd put my novel originally) "they" say a word count of around 110k is good (between 90-125k), as there are lots of details to elaborate in a fictional world. Even a Fantasy book is around 90-100k words.

Quote: *
My publisher has put my novel into the Dystopian Thriller genre, which is a burgeoning one and not overly mainstream, which I don't mind. I hadn't, however, rethought my original research on the matter and was still aiming for the lofty Sci-fi heights.

Turns out I need to be aiming for 70-75k words for my first novel, for various reasons, which all make sense. You don't know me! I could be writing about the joys of discovering 2 ply toilet paper in a Victorian noir romp (Spoiler: I'm not, but hey, there's an idea!)

The "Up" in all this, is that I'm at around 73k words already, so my "Christmas" target for completing the first draft (and aiming for all those extra words) has suddenly become Thursday Next (ah now there's a book that I'd read 125k words in).

OK, so not quite next Thursday, but I can begin to wrap things up, which I was beginning to wonder how I was going to keep going for another 30-40k words! I'm no longer "aiming" for a word count, the words that go down now will be because they have to be there. All the ones I've written already are pretty good words in themselves and in a pretty readable order too, but there's a cull coming. 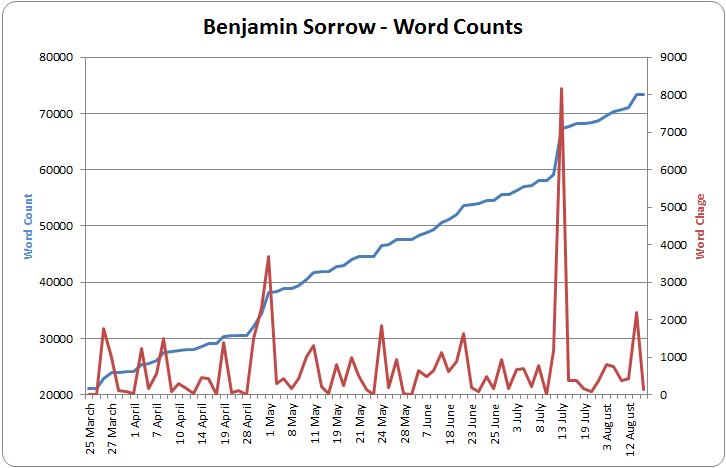 This will be happening sooner than I thought as well, so will be time to sweet talk my boss into letting me print about 130 A4 pages in the office one afternoon, OZONE anyone?  If I get to around 80k, I can edit that down and I already know of one bit I was never happy with, so that can go.

Does anyone have any tips for a First Edit? I "plan" to consume some trees, use copious amounts of coloured pens and small post-it notes to scribble and draw on the draft. I had thought about just sitting in front of Word and editing as I went, but I think my issue there will be distraction. If it's on paper (I remember doing this at college many moons ago) I can visually see where I've "been" and not keep rehashing the same bit, adding a word, removing one etc. Ideas welcome!

Saying all this, the original target was for February 2015 release, which if I get my arse into gear and edit this nearly completed first draft, might still be on the cards.  It was always flexible, but I was beginning to think at the rate I was working, it would be middle to late 2015.

Anyway, I'm suddenly feeling like the cat that got the cream, but also aware that I need to figure this damn ending out ... and quick!