Showing posts from 2022
Show All

Things have changed a bit around here 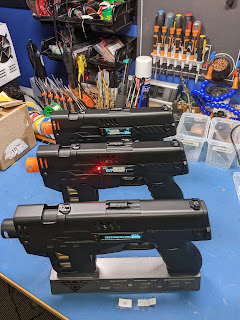 Greetings (Judges) Well, I thought it was about time I dusted off the cobwebs and cranked the handle for the furnace that warm the angry pixies and powers my website. I have been busy recently, with numerous projects that have all consumed a large portion of my life, and along with two growing kids things have been all but silent here. What's new? I have been working on an RPF project for the last few months, building the Lawgiver from Judge Dredd (2012 with Karl Urban). An awesome designer, Chris Patch , created a 3D printable Lawgiver that faithfully matches the screen used weapons, with some input from the original prop maker Michael van Kesteren . This run (for me at least) is coming to a close now, so here's a few pics of my finished props. I have built three of these for people who are cosplaying as Dredd or just want to run around their house, talking to a Lawgiver and making pew pew noises. Actually, the prop does both of those things! Yep, you can speak to the Lawgive
Post a Comment
Read more
More posts