Yes, this is an update ... within a week or so of my last one! Will wonders never cease? Seriously though, this is an attempt to be more interactive with you.

If you follow me on Twitter, you've probably seen that I've been posting updates about word counts recently: 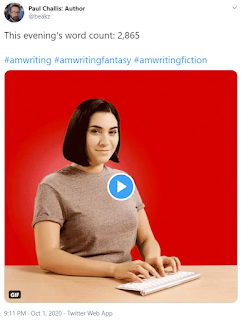 I'm found some drive to work on The Oracle and the Fedora, which I started a few years back after lunch with some friends. Random titles were thrown around, and I bagsied that one for myself. An idea immediately sprang from it, and I'd started writing it on Wattpad, with the intention of it being "read as I went". This worked for a while until I got really stuck into The Lichfield Ice Cream King (now with final beta readers!), but then I decided that it would fit nicely into a world that I was developing inside another novel. That one has proved to be a struggle, but the Fedora story has grabbed my attention now, and won't let go.

So The Oracle and the Fedora is now at just over 32,000 words and going strong. I do want a better cover though, in the vein of all the other fantasy novels out there, but I suck at computer art!

I've decided not to enter this year, purely because I don't think I'll be able to focus enough to write a full 50k words. I will be recording my word counts still to see what I can organically do in a month, but I won't beat myself up about not hitting 50k this year. I've already got two other 50k first drafts from previous years, so feel I should give each one some love and not start another. I know I could do 50k on the Fedora, but again, pressure.

So, I hope you are all doing well, and I look forward to sharing more of The Oracle and the Fedora as I develop it.