A couple of productive days

I didn't get the early starts I was hoping for. Up at 6am with the little man, childcare by 8am, had to tackle the lawns, done by 10am. A lot of today was spent talking out loud to myself, going over the plot and interactions of my characters. A whiteboard helped! Turns out, I had a couple of issues with where characters were going and that took a few hours to work out.

I think I have a more cohesive flow of plot devices and stories now. Time will tell.

Again, didn't start as early as planned. Had to take our dog to the vets for a check up after her knee surgery, so managed to get a bit done from 0800 to 0830, but didn't get cracking properly until 0930. Still, better than yesterday!

The words seemed to flow easier today, the conversation with myself yesterday certainly helped things along a huge amount.

Tip of the day

I was struggling to work out the next chapter that should follow on from where I left off. It was bugging the hell out of me. I knew where I wanted to go, but couldn't figure out how to get there. I found an article somewhere (I've lost the link, sorry!) that basically said, "Write a chapter of your book. It doesn't matter if it's the NEXT chapter, as that can leave you wanting."

Anyway, I paraphrased that A LOT. I was having a hard time thinking of what logically followed the chapter I had just written, but then read this article and wrote another chapter that came later. I knew I needed to write it, it just didn't follow on. Having done that, the block I had went away and the missing chapter manifested itself nicely.

This is a tip I'll remember and would recommend.

I pulled out the various versions of the Novel from March (when I started properly again) and scripted the word counts. Here's a chart, 'cos who doesn't love a good chart! 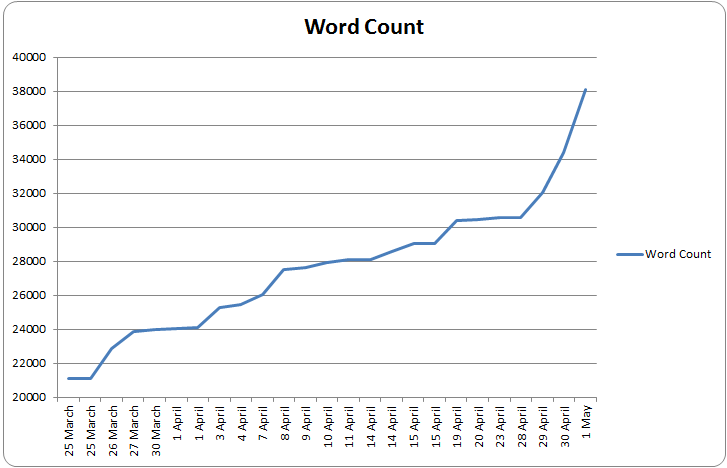