I said in my last post that I was finishing my 4th draft and getting ready to submit the manuscript to my editors ... yeah stuff happened. Mostly because juggling two young children (not literally) and finding time at the end of the day to write, has been a struggle. I missed out on some writing time on the family holiday, due to ... well not going (kids with chicken pox and border control aren't best friends).

So what have I been doing? Another edit! But, I think this has been only for the best. I've seen lots of things in my writing that I suddenly realised, I didn't like, or didn't read well. I've revisited the dialogue and made improvements there. I've trimmed some of the waffle, which makes the text easier to read. A few changes to the plot and characters here and there, hopefully makes them more believable?

About a year ago I posted a chart showing my word count progress, and I was near the 80k mark (mostly on an upward trend). Since then, I've taken a hatchet to the manuscript, and edited down to just over 70k. Here's an updated chart showing the word count and word change trend. 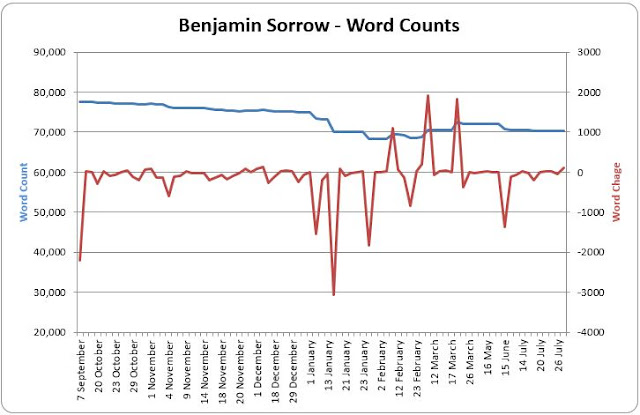 You can see from this chart, the culls and new material added (well how much of it anyway).

So, what now? A bit more tweaking, then I'm going to have to let this one leave the nest and send it to the editors! I know what I'm like, I'll keep editing until I run out of keystrokes, and I'm keen to get on with something else now. I've got lots of other ideas for novels, and am forcing myself to leave them alone until this one is "in the can".

I'll update when I have something new to tell you (hopefully soon!).
Location: United Kingdom