Wish I Was Here - Backers' Premier 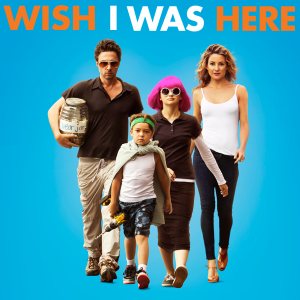 Well, made it to London and the Cineworld O2 last night for the UK backers premier of Wish I Was Here. Firstly I just need to say, GO SEE THIS FILM!  It opens across the UK next Friday, 20th September.

I, and I'm sure all the other 46,520 backers, are proud and privileged to have been a part of this whole experience.

I wanted to take lots of pictures of Zach as he did the Q&A at the end of the film, but didn't. Why didn't I?  Two reasons.

I have a crap camera on my phone and sitting at the back of a 700 seat cinema screen gave no chance of taking any decent pics. I got one of the title page with the hashtag #WishIWasHere, but that's it.

I realised that we spend far too much time looking through the screen of a camera or view finder instead of enjoying the moment. Actually, there is a part of the film that talks about epiphanies and I think I actually had one when Zach came out at the end of the screening. Yes, I was there and I could have taken hundreds of pictures of Zach Braff, the auditorium, the other backers and posted them saying "Look who I saw!".

You know what, I saw him and listened to him talking passionately about his film, that, had I been trying to take pictures the whole time, I would have missed the reality of it all. I will remember that event and it's in my head forever. There were a few empty seats at the VERY front of the theatre, but I suspect I would have missed half of the film from nausea craning my neck to watch it through.

The people on the very front row were in for a treat, especially the lady who had Zach's crotch in her face whilst he strained to listen to questions being thrown at him, I suspect she has some AWESOME pictures to post on her Facebook, Instagram, Twitter, MySpace and Tumblr accounts (MySpace is still a thing isn't it?).

Well it certainly doesn't disappoint. Zach said in the Q&A afterwards, that much of the subject material would have been cut or toned right down had he not funded the film through KickStarter. The original financial backers wanted him to concede so many parts of the process, not filming in LA, not using the delicate subject matter, changing the cast, so I believe he was right to do what he did. I would say that the KickStarter backers would agree whole heartedly.

The pace of the film was perfect. The humour was well balanced against the moments you wanted to cry your eyes out, with lots of those moments feeling far more real in this film than many I have seen. Not ashamed to admit I welled up several times throughout. It made me think about my kids, family and aspirations. My current dream of being an Author slotted in well with the feelings and emotions Zach and cast portrayed brilliantly.

Only having Mandy Patankin for 4 days of the 25 days filming, and getting such an emotive performance was just genius. Mandy is an amazing actor anyway, in fact everyone in the film was just amazing. Even the young cast made it feel like they had been in front of a camera for years.

The music, new and old is perfect for this film and Chris Martin put together an amazing track for the film. Zach certainly has many good friends.

I urge you to see Garden State and Wish I Was Here and continue to fund film makers who want to make something that isn't just Hollywood dross. The film was a 15 (UK) which was refreshing. Too many blockbuster films are being watered down to 12A just to get a young audience dragging parents to the cinema to spend more and more money on throw away films.

My hat's off to Zach and the rest of his crew for pulling off an amazing venture with class and dignity (especially with the subject matter).